An Interview With “The Rev” @GaryVee

Today I had the opportunity to interview Gary Vaynerchuk. Truth be told, I have been on the hunt for this interview for awhile and it met all my expectations. Gary is a social media icon, business man, wine aficionado, and future owner of the NY Jets, sans Tebow.

Three questions, 10 minutes, and lots of gems…but no F-Bombs…(the most commmon question I have received since doing the interview). Tomorrow, Gary will be on CNN with Wolf Blitzer, today he is talking church, social media, and what he would do if he was a pastor. 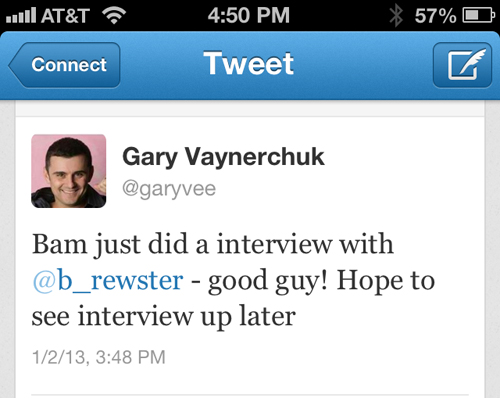 1. When it comes to non-profits using social media, there seems to be a lack of traction, what is being done wrong and who is doing it right?

2. As a church, we tell essentially the same story every week for years and years. As a communicator, how do we keep the story interesting?

3. If you were a pastor and you were planting a church in a local community, what would your first hire look like?

It is always great to hear someone approach our world, the church world, from a different angle. Thanks Gary for taking the time to chat today and for allowing me to pester you. It is much appreciated.